For several people I know, 2009 has brought challenges and crises. For most, they might have chosen it to be otherwise, but it could have been worse. By now I'm sure that everyone has heard about the birth of octuplets last week. That's right - OCTuplet - eight babies, and thus far all seem to be thriving. I immediately recalled the Dionne quintuplets and their mixed up, messed up lives, dominated by press and overprotective doctors. I immediately assumed in-vitro fertilization and the ambivalent feelings the new parents must be having at this moment - ambivalent - happy and yet concerned about how to care for so many infants. I had initially missed the fact that these eight babies were delivered to a single mother of six children under the age of seven. Oy vez!

She did this on purpose! She says she just loves being a mother. She has always dreamed of being a mother. She hoped to add another girl to what for most people in our culture would have been a large family. And somehow she found a fertility clinic to go along with her plan. When they discovered there were seven fetuses (they had not been able to see the eighth), doctors were unable to convince her to abort any of them, so that the survivors would be stronger, etc. Is she crazy? How does she, a single woman, plan to support and raise thirteen children?

There are now thousands of blogs devoted to the outrage people are feeling toward this mother-obsessed woman, who has already hired a public relations firm looking for a two million dollar book or television deal. She wants to host a TV show as a mothering expert. Well, maybe she's crazy like a fox?

Before her in-vitro fertilization conception, she worked in a mental health facility. I dare say she should have been a client, but that's beside the point. My question is to the medical profession who, at least in theory, swears to "first do no harm." How could you, I ask, in good conscience, believe that enabling this single, obviously obsessed, woman to have yet another child would not do harm? I find it hard to believe that a reputable fertility clinic might not have had reservations at the second, third, fourth, fifth or sixth child, let alone the seventh. Instead they have enabled what appears to be an obviously mentally ill woman to create a family that will take a small army and several million dollars to raise and educate to age 17. 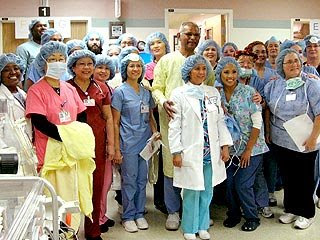 Even the corporations who would usually be lined up ready to give houses, diapers, baby food, clothing, etc., are being cautious as they feel the outrage of the bloggers. My outrage is more at the fertility clinic that cooperated and enabled her obsession. It might have been otherwise, but then maybe the 47 people it took to deliver and care for the preemie newborns will each seek a book deal, too. Maybe they'll turn the economy around...or maybe the taxpayers will find themselves having to bail out this family, too. It might have been otherwise. Someone somewhere along the line might have said, "Enough, already!"

I grew up during the Great Depression, one of only three children. When my children were school age, I resurrected a family recipe from the mid-1930's, which may come in handy for this mother of fourteen during this economic downturn. It takes no time at all to mix up, which I'm sure this sure to be busy mother will appreciate. In fact, with a little help the eldest, the 7 year old, will even be able to make them. He'll probably be doing a lot of helping out, I'm guessing. Child labor laws don't apply to family members, you know.

Mix and pour into greased jelly roll pan. Bake at 350 degrees for 20-25 minutes.
Frost with a thin powdered sugar/lemon or orange juice glaze.