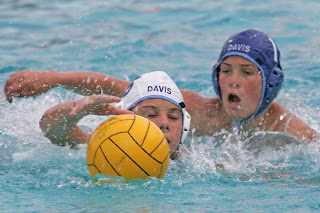 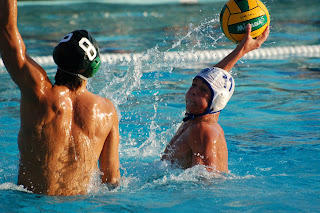 Pictured L-R: Max (#11) in both pictures, taking a shot in a game; defending against a teammate in a scrimmage.
* * * * * * * * * * * * * * * * *
I was first introduced to water polo back when Marci and Laurie were in high school, I watched Dave Scott play for the Davis High School Blue Devils team and then a few years later Mark played for the DHS team, too. And then Marci had several friends on the UCD varsity water polo team during her Freshman year, and I watched several of their games then. I've always enjoyed the sport, but never so much as when I know one or more of the players. It was fun to watch the USA team at the Olympics when Craig Wilson was their goalie.
Grandson Max, a junior, is playing for his third year for DHS Varsity. As winners of their League, they played against Turlock today in the Quarter Final Play Offs in Lodi. I've missed all of their games this season, but had vowed I would make the Section Finals. I must confess this game against Turlock was not very exciting as their opposing team was far outgunned and outmanned! The good news is that all of the Davis team members had a chance to play. Max scored three of the 16 points against Turlock's 3 points, most of which were scored during the quarters in which the starters took some time out on the bench. The team and coach expect Thursday's game, also in Lodi, to be more challenging.
The coach's note to team and parents: , This week will mark the final week of Blue Devil water polo this season. Time flies! Of course, our objective is to make it to the section finals on Saturday. While it may be easy to look past teams towards a “probable” match-up with Jesuit in the finals, I want to remind all of us—athletes AND parents—that we cannot look past any opponent. Each of these teams wants their season to continue, as well. They will compete as though their season is on the line, because it is! As I like to say “If the Aggies can go to Stanford and defeat them in football, then anything can happen”. That being said, I have reminded the boys to focus solely on our match on Tuesday against Turlock H.S.
Jesuit is the team to beat, apparently. I remember one game against Jesuit last year, in which it seemed they had what appeared to be an unlimited number of players, it seemed - good players deep and big! Jesuit is a school that requires every student to participate in a sport, so they have
many students coming out for every sport - many more from which to draw than Davis High School. Davis' more experienced team beat them once this season before their novice players had gained experience. We'll see about Saturday!
We drove back in separate cars, rendezvousing at Sudwerks for lunch. I had their pot roast sandwich, plus a few of Max's hotwings and Marci's garlic fries. I'll not be needing any dinner tonight!
The good news is that it's 4:12 p.m. and I haven't had the TV on all day, so I don't have a clue what the stock market did today or what the pundits are saying about President-Elect Obama and what he might or might not do. The evening is young!
Joan
Posted by Bird by Bird at 3:32 PM No comments: