One Story Begins...and Another Ends 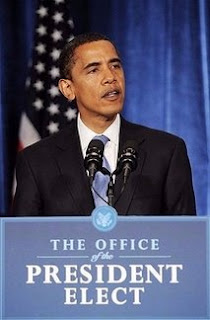 A new president cannot pick the place his story starts. As I predicted, President-Elect Obama is not letting any grass grow under his feet.
Today he spoke by phone with top world leaders about the world financial crisis as well as other problems. And then he moved on to a meeting with his large economic advisory team and then quickly to his first press conference since his election on Tuesday. Beside him were Vice President Elect Joe Biden and newly appointed Illinois congressman Rahm Emanuel as his chief of staff. Standing in support behind him were sixteen or so of his economic advisors with whom he had just met.
While still seeming very presidential, with a much more casual flair, he made a couple of jokes and smiled broadly, seeming surprised when the press stood as he walked toward the podium. (Later in the day, he called to apologize to Nancy Reagan for a joke he deemed inappropriate. When asked if he had spoken to any of the past presidents about transitioning into the White House, he said yes, he had, and then quipped..."at least the living ones, not to be confused with the Nancy Reagan seances." As it turns out, even that was a mistake. It wasn't Nancy Reagan at all to whom he wished to refer; it had been Hillary Clinton who claimed to have had sessions with Eleanor Roosevelt. Nancy Reagan had just read astrology to find appropriate dates for things for the President, as I recall.)

Yesterday the first day after the election with a dismal job report just out, the stock market took a 500+ dive. Today the market reacted to Obama's apparent swift action (or perception that things would be better) with a couple hundred point recovery.

I spent much of yesterday and this morning finishing The New Paradigm for Financial Markets: The Credit Crisis of 2008 by George Soros. I should have read it in May when it came out! However, since I'd rather have a root canal without anesthesia than read about economics, I had put it off until the situation became desperate. I really needed a translator for some of what he described. One of the main points I got from the book is that "perception is reality and it is unpredictably dynamic and unreliable." Of course, I've known that for a long time. Warren Buffet sneezes and the market goes down. When he's smiling or when Greenspan (or now Bernanke) indicate lower interest rates, market goes up. Better than expected earnings reports and market goes up. Two cents lower than expected - down. Go figure! Confidence is everything.

I understood before I read the book about the millions of foreclosures and trillions in credit losses. I've a glimmering of how the market works. I've known that it is all a matter of perceptions and confidence. I also knew about the bailout - excuse me, that's not what it's being called now, is it? This book talks about derivatives and all kinds of foreign sounding words to my ears. And George Soros does not paint a rosy picture for the next few months or even years. This book is not reading for the faint of heart!

It was reassuring after this grim reading to know that our new President-Elect is on the job...and that he is surrounding himself with economic gurus. Rumors are rampant about who he will select to be the new Secretary of the Treasury. Never in my memory has that been such a hot item in the news this early in the game or of particular interest to the general public. Now, it seems with 401K's and people's jobs and livelihood at stake, everyone seems to care. My checking Schwab's daily report clearly shows my interest!
* * * * * * * * *

As I opened yahoo tonight, an article in Truthout by Bill Ayers popped up and caught my interest. He remained remarkably silent during the election, but here now three days after the election is an article you may want to read. He says, "It has been a wild ride!" http://www.truthout.org/110708R

On a more personal note, I received an e-mail from a friend that included a Face Book post from today about our friend, Dick Brunelle, who suffering from dementia and is currently in Sierra Convalescent Hospital.

The young man, a former student of Dick's, wrote a touching tribute to a dedicated teacher of music who had more than casually touched his life. Indeed. My son, Mark, sang in his Madrigal choir for three years. Valerie played violin in the concert orchestra under his tutelage. He inspired many. A fitting tribute took place a few years ago when a massive reunion choir from all of the years of the Davis High School Madrigal Singers gathered for three days of rehearsal, and sang a concert at Mondavi Center in his honor. He clearly enjoyed the event and seeing old friends. The new performing arts center at the high school has aptly been named in his honor.